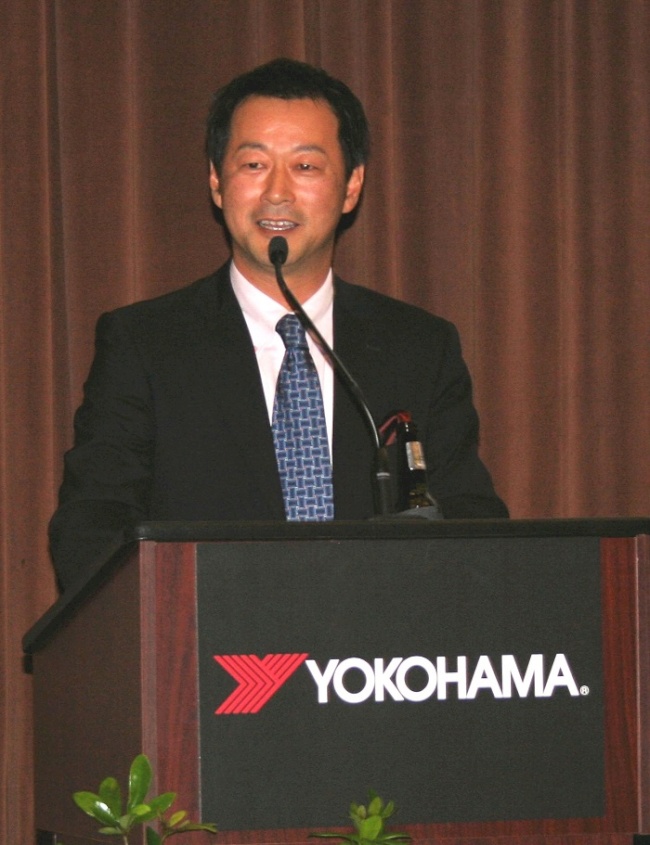 FULLERTON, CA. – (Jan. 13, 2014) – Yokohama Tire Corporation (YTC) is on a roll. First, it celebrated a landmark year in 2013 with the groundbreaking of its brand new commercial plant in West Point, Mississippi and this year, the company is set to have a record year with the number of product launches it has planned to satisfy customer demand. In this Q&A, YTC’s Chief Operating Officer, Takayuki Hamaya, takes a look back at YTC’s performance in 2013 and shares an outlook on what the company– and the tire industry in general – can expect in 2014.

Hamaya: 2013 was historical year for Yokohama. In April, we announced the building of a commercial tire plant in West Point, Mississippi and in September, we broke ground at the site. It’s very significant because it’s the first plant we’re building in the U.S., and when it opens in October 2015, it will eventually produce one million tires annually.

The decision to build in the U.S. was a long-time dream for Yokohama. Now there are many new possibilities and this is just the beginning. We have enough space at the plant to expand. This offers us new capabilities and strategies.

Question: How did the market segments of consumer, commercial and off-the-road tires perform compared to each other?

Question: It seems like the consumer segment hasn't gained traction the past couple of years. Why is that?

Hamaya: We are seeing an increase in demand in the consumer market, but it has not happened as quickly as we would have expected. Market conditions have played a big factor. The total demand for consumer tires was up vs. 2012, but the market share for the U.S. industry as a whole was down due to the continued influx of Chinese imports.

The good news is that the U.S. economy is picking up and total demand is increasing.

Remember, the consumer tire market is a challenge across the globe, not just the U.S. Whatever country or market you’re in, there are different types of obstacles. The U.S. business is unique because of the sheer size of the market. It’s bigger than all of Europe, where you have to market globally but execute to each country locally.

Question: Why do you feel OTR is struggling?

Hamaya: Despite the rebound in housing and construction, OTR is really down. There’s much more inventory than demand. There are many reasons for this, including governmental budget cuts and the shift from coal to natural gas. The mining industry took a huge hit with the slowdown in coal production, and some mining companies stopped operations.

Question: Do you see the OTR market picking up again soon?

Hamaya: 2013 was just one of those down years that happen every so often. OTR will rebound again in a couple of years. Some of our competitors have built new OTR tire factories here in the United States because they see the same trend.

Hamaya: We expect to improve upon our success in 2013. The market will still be challenging, but we are in a good position. We have several new products that are scheduled to launch in all three divisions and we are committed to continued growth in the U.S.

Question: Whether it’s consumer, commercial or OTR, is aggressive marketing one of the strategies YTC will be adopting in 2014?

Hamaya: I think you will see an increased presence from Yokohama in 2014. It’s important that we are effectively speaking to both our dealers and the end-user. We want our dealers to know and see that we are supporting them.

Question: Will YTC launch any new products in 2014?

Hamaya: Yes. In 2013, we successfully launched two new ultra high-performance tires from our flagship ADVAN® line, the ADVAN Sport® V105 and ADVAN Neova® AD08 R. Looking ahead to this year, we are expecting to release many new products, including consumer, commercial and OTR tires. At this point, we are looking at 2014 as a record year in terms of product launches.

Question: What message do you want to communicate to your dealers?

Hamaya: We want our dealers to know we’re doing everything we can to help their businesses. We will continue to strengthen our relationships with them by listening to their feedback and adjusting our strategies to meet their needs.

To be successful in 2014, we have to be strategic and have our plans accepted by our dealers as well as by the market. I am confident in the initiatives we have developed to support our strategies going forward.

Yokohama Tire Corporation is the North American manufacturing and marketing arm of Tokyo, Japan-based The Yokohama Rubber Co., Ltd., a global manufacturing and sales company of premium tires since 1917. Servicing a network of more than 4,500 points of sale in the U.S., Yokohama Tire Corporation is a leader in technology and innovation. The company’s complete product line includes tires for high-performance, light truck, passenger car, commercial truck and bus, and off-the-road mining and construction applications. For more information on Yokohama’s extensive product line, visit www.yokohamatire.com.

Yokohama is a strong supporter of the tire care and safety guidelines established by the Rubber Manufacturers Association and the National Highway Transportation and Safety Administration. Details can be found at the “Tire Care & Safety” section at www.yokohamatire.com.

We use cookies on this site to enhance your user experience. By clicking any link on this page, you are giving your consent for Yokohama Tire to set cookies.

You are now leaving www.yokohamatruck.com

Please click CONTINUE to proceed to leave or CANCEL if you wish to stay.